Hard to believe it’s December 2019! We appreciate each and every one one of you, and I hope your year is ending strong!

This year was mostly a blur, with some wonderful blessings happening this year as well! As some of you may know, Mary and I built our own home this year and completed it and moved in at the end of September.

After 22 years of being in construction, it was finally time to build a house for my family! It was mostly fun; I did around 75-80% of the work myself, so at times it was a bit stressful. All the excavation, foundation, framing, & plumbing I was able to take care of myself, and a chunk of the finish-out work as well.

Our subcontractor teams were also a huge help in getting the project finished up and being able to move in by the end of September. I broke ground on the project in March, having already done the 1/3 mile gravel driveway prior to that over the winter on weekends and evenings.

Our house is a part of our company’s recent New Home Build portfolios, and will be a house we can show to any of our clients that are interested in looking at the products and the contemporary farmhouse style we went with. 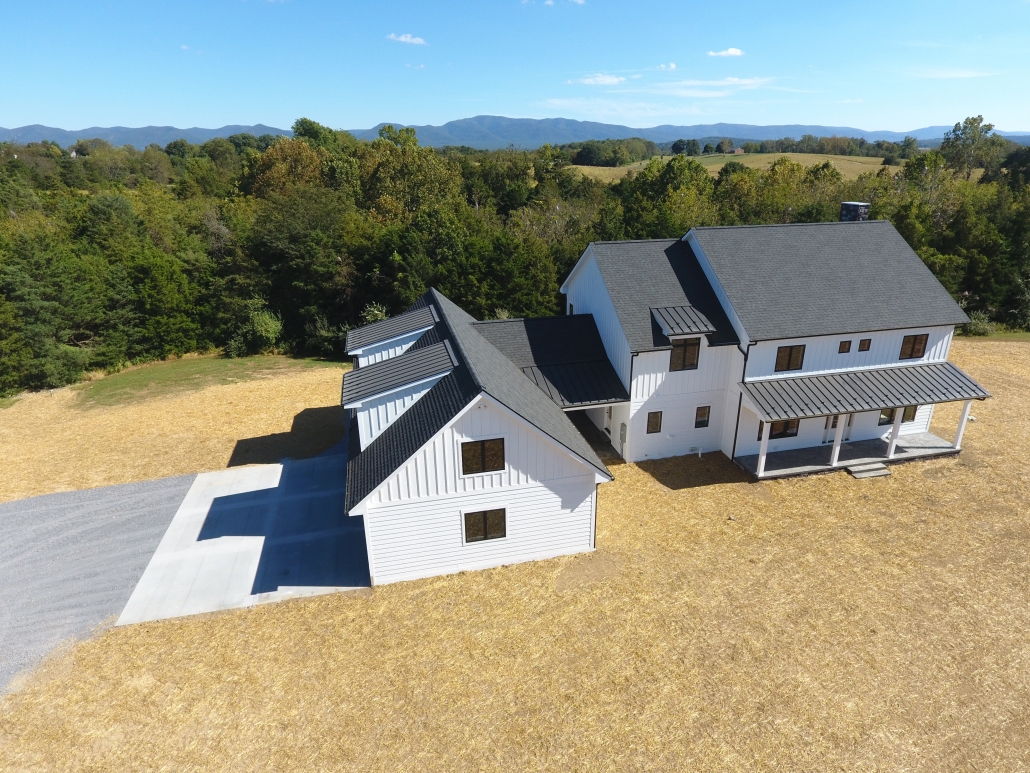 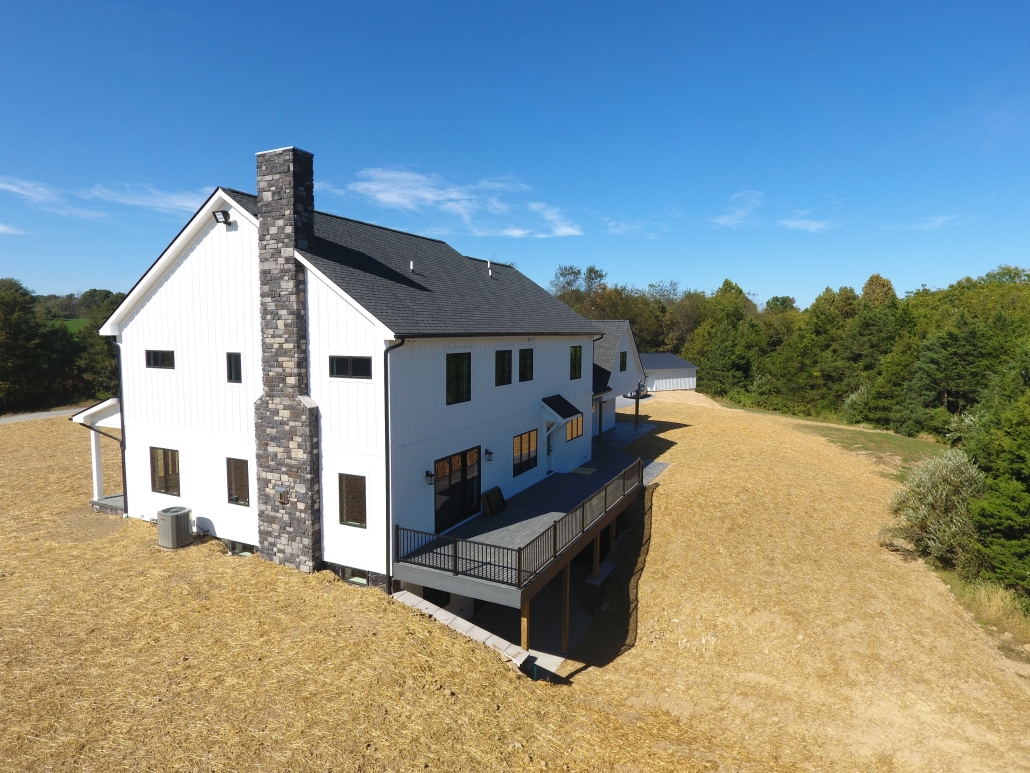 Mary and I had been looking over house plans for about 6 years, and finally found a plan online that met most of the criteria that we had for our home. We bought the copyright on the plan, and had it modified some to meet what we envisioned and what would work well for the lot that we had.

We wanted to be able to stand in the kitchen and see out all sides. That pushed all the bedrooms upstairs and meant an open floor plan was what would work best. 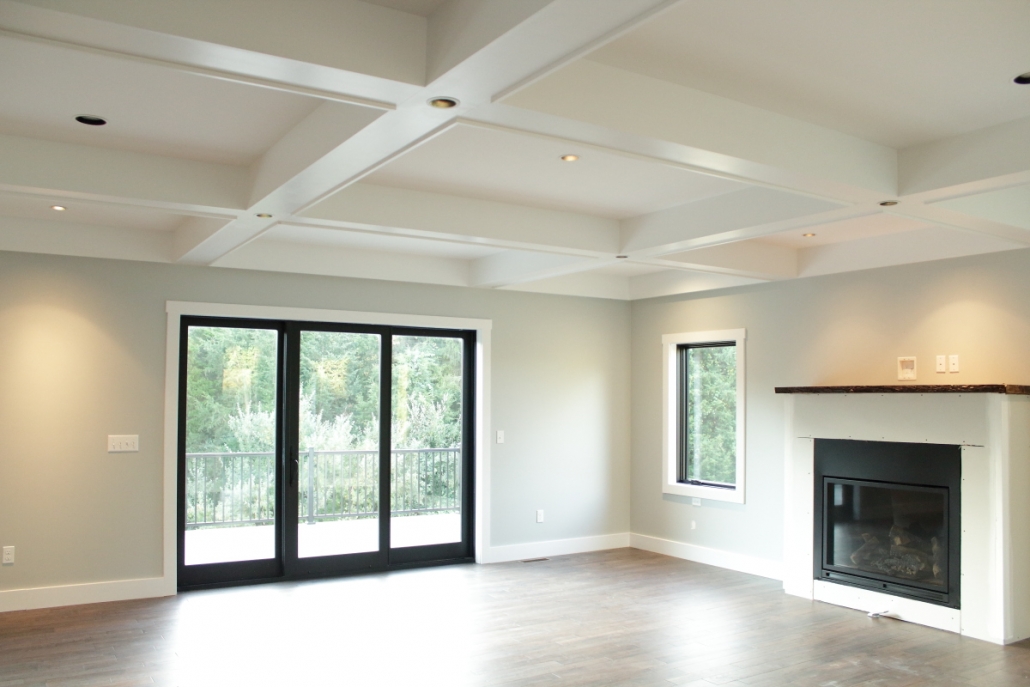 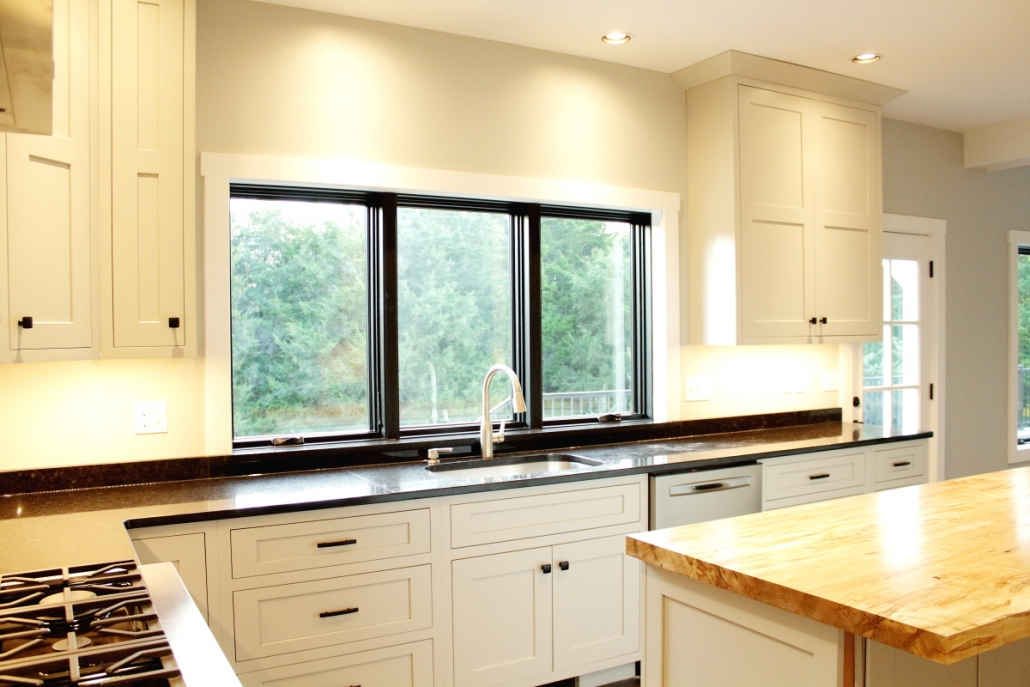 Hospitality is something our family enjoys doing, and this house has the open space to allow for that. The big kitchen, open floor plan, large dining room, and guest bedrooms make it optimal for welcoming and hosting people. We were able to host all my family from Lancaster for Thanksgiving, and they were able to do an overnight stay easily! 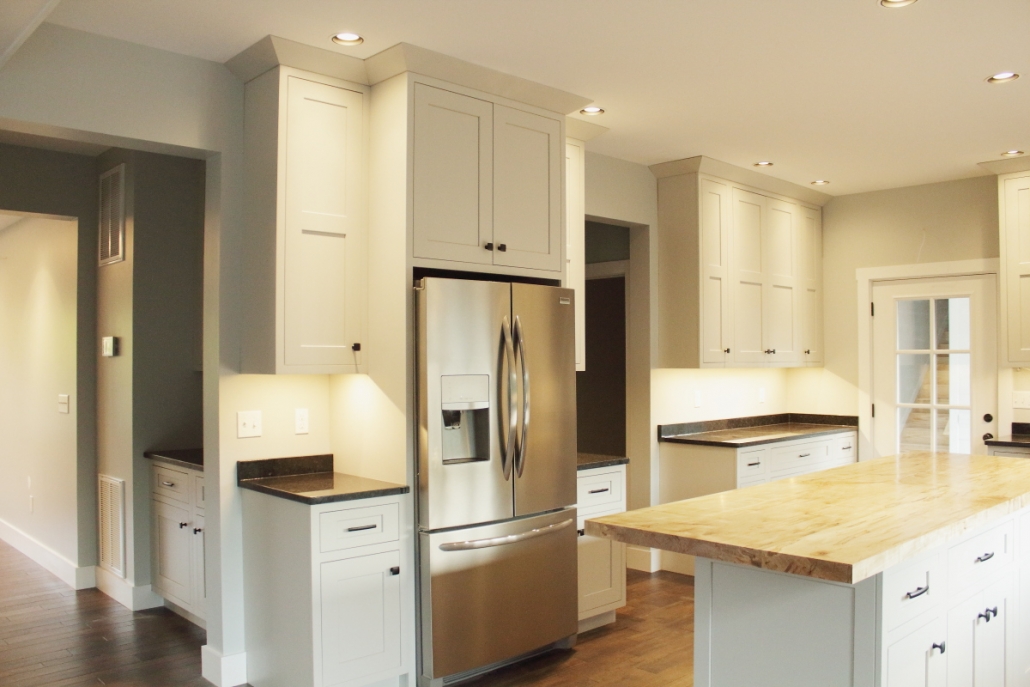 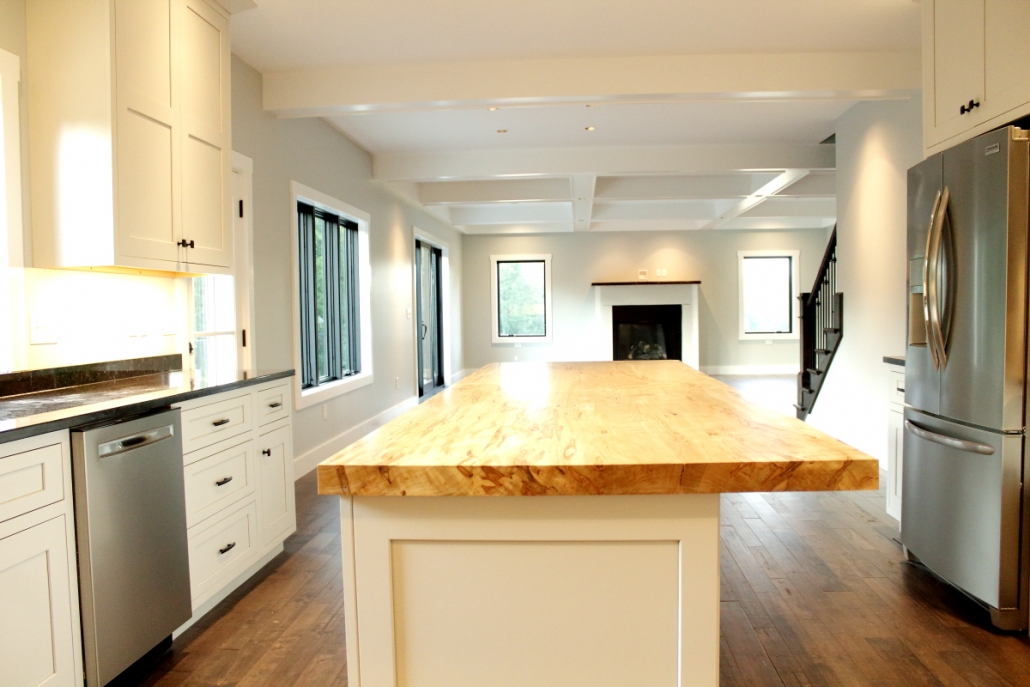 The focal point of the kitchen is the beautiful silver maple island top purchased from a local sawmill, and sanded and finished out at Knicely Planing.

Natural lighting was  big priority for us. Marvin casement windows and patio doors and light colored cabinets, walls, and ceiling accomplish this goal. Meanwhile, the black window frames and counters and the dark hardwood floor add a nice contemporary flare. 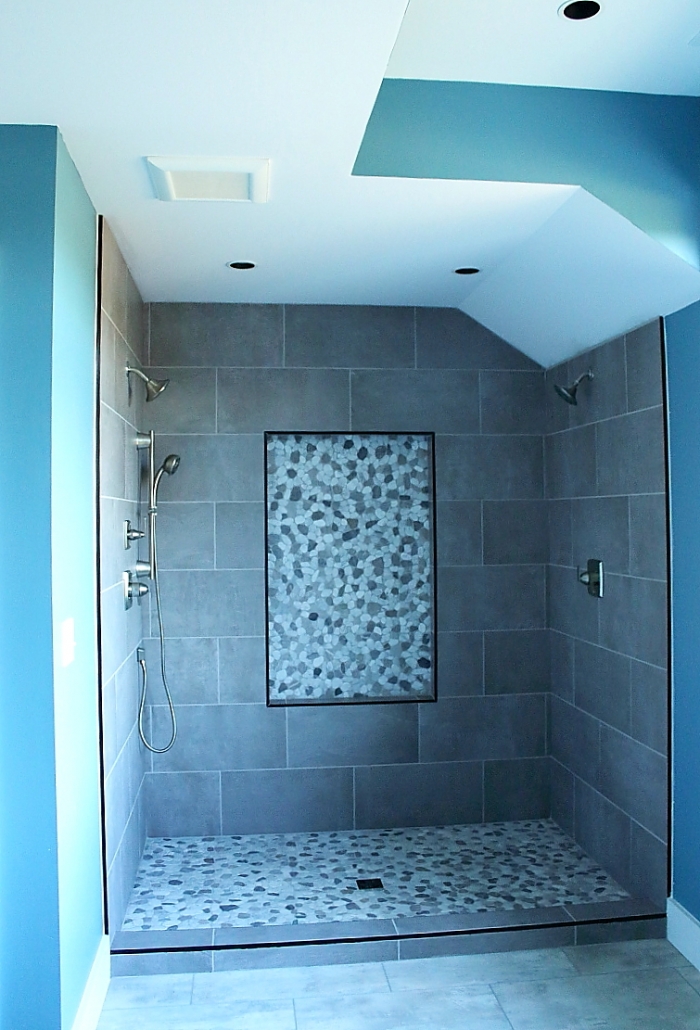 Lots of shades of blue are featured throughout the bedrooms and master bathroom. The bright green home office adds some fun color, matching one of my favorite summer shirts that I like to wear….:)

One of my favorite parts of the house is the master shower; having 3 shower heads is really nice! We will also enjoy the outside areas when it warms up, with a covered porch on the front, open deck on the back, and a future screened porch that will be between the house and the garage.

Another of our favorite parts of the house is the location. The house is only visible from the planes flying low overhead from the nearby Weyers Cave Airport, or from about a 100′ section of the road a 1/3 mile away.

Thanks for reading, and Merry Christmas from all of us!

Team Member Question of the Month:

If you were given five million dollars to open a small museum, what kind of museum would you create?

Manny: A museum on the evolution of construction methods over the decades…with a Milwaukee and Dewalt tools section as well. $5 million won’t go very far on doing an aviation museum…:)

Gerald: I would do a history museum about world history and how it aligns with Biblical history. Also how humans have learned and/or not learned from history and how many times certain actions have been repeated

Mary: My answer would be similar to Gerald’s. In fact, I think I would just give my $5 million towards his museum.:)

Mahlon: I would like a museum with info on the birth, journey, and rise of the acoustic guitar. Filled with popular brands, such as Gibson, Martin, Fender, and of course my favorite, the Taylor guitar.

Justin: I would say a weapons museum. One exhibit would show the very first black powder rifle, all the way up to current rifles. It would also document the evolution of the ammunition as well.

André: I think I would do something on the history of the Appalachian Mountains and the people who lived there.

Jared: A Civil War Museum…with a ton on Lincoln and just soldier life.

Kaitlyn: I’d open a children’s museum full of hands-on exhibits. It would include several optical illusion rooms and displays, a glass room where children can paint on the walls, Williamsburg-style historical towns from different periods, and science experiment stations galore. 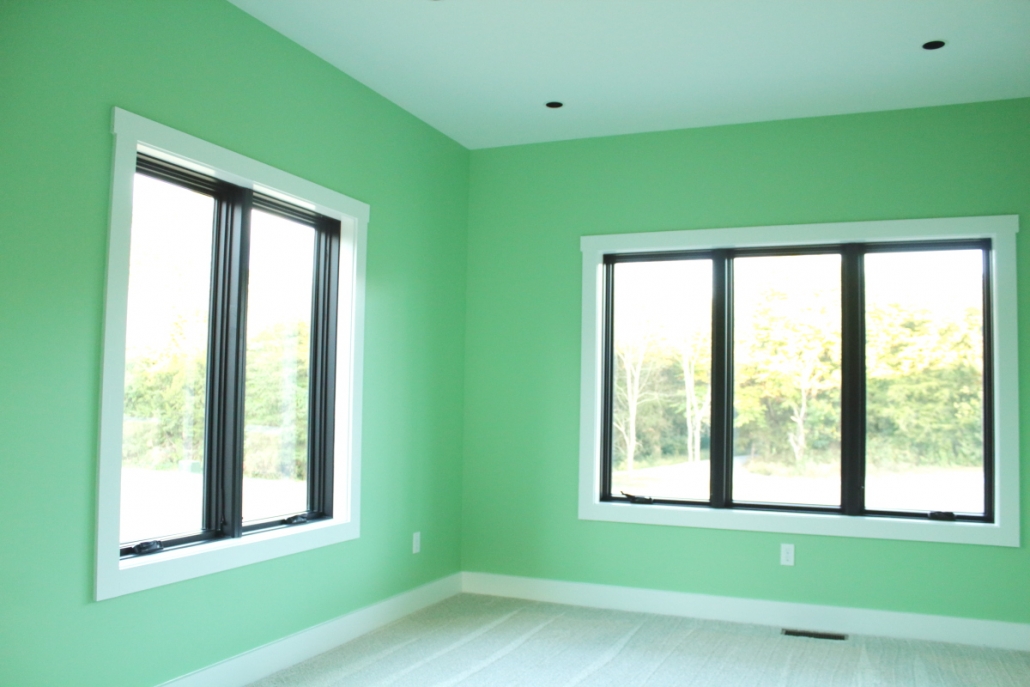 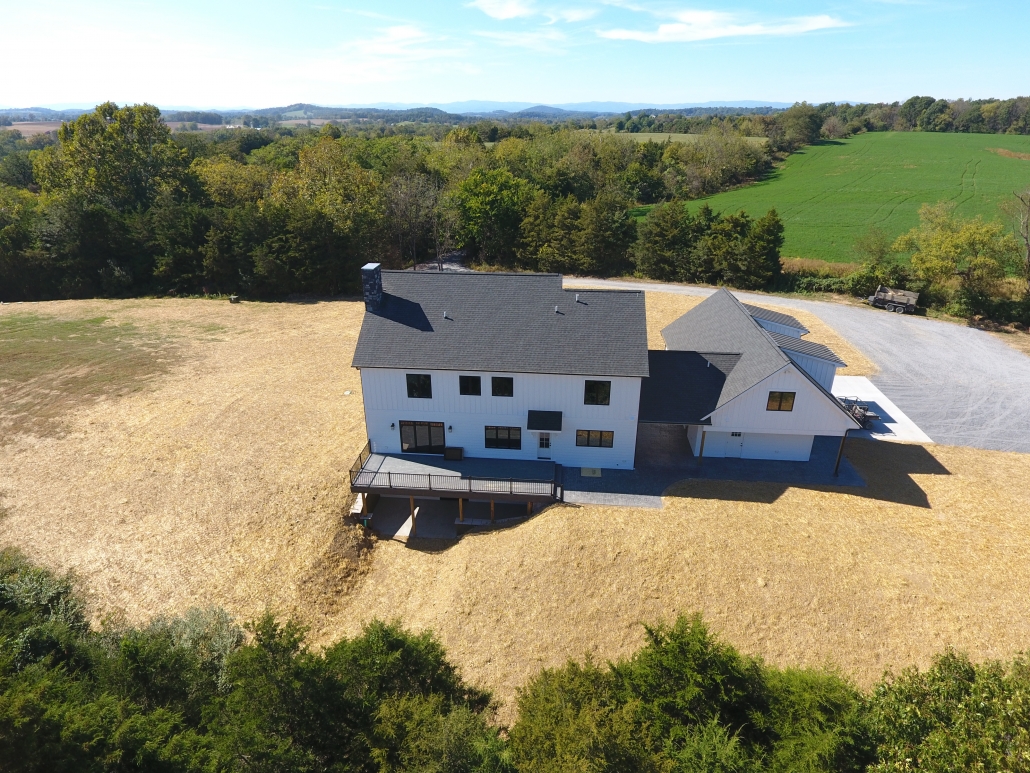 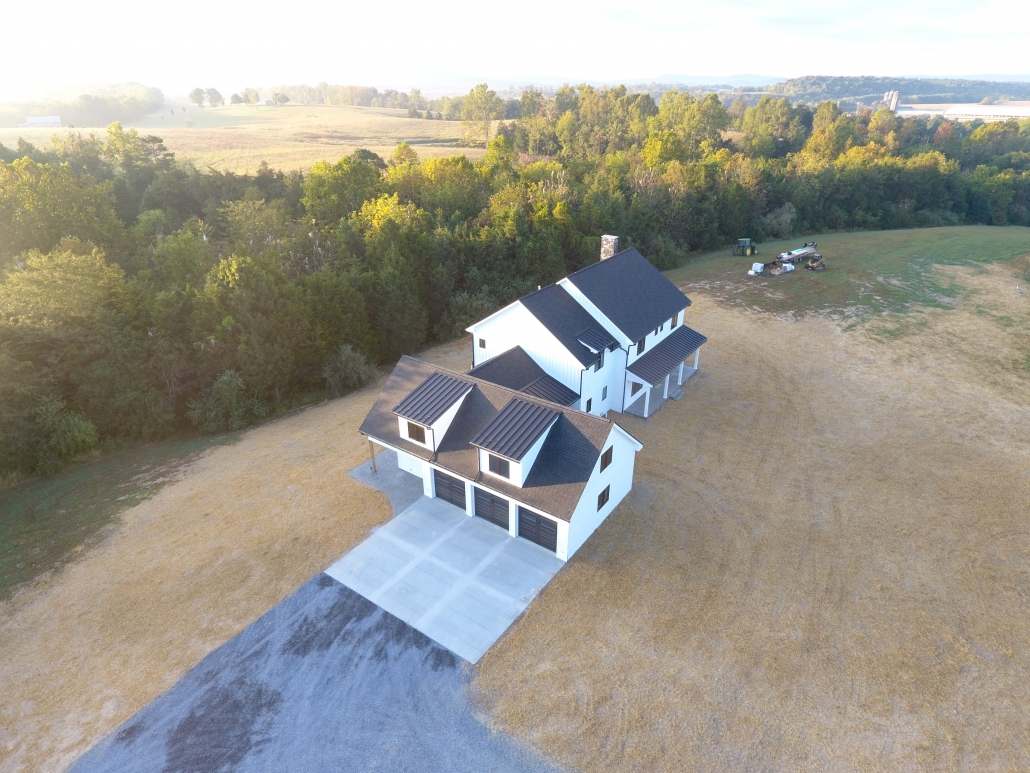 Want An Estimate? Have Questions?

We do not share your personal information. All fields are required.
Or just call 540 246-1740
Hellos and Goodbyes